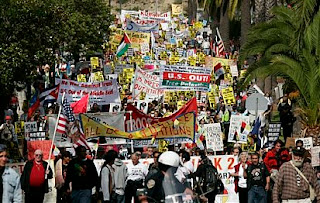 
Thousands of people called for a swift end to the war in Iraq as they marched through downtown on Saturday, chanting and carrying signs that read: "Wall Street Gets Rich, Iraqis and GIs Die" or "Drop Tuition Not Bombs."

The protest was the largest in a series of war protests taking place in New York, Los Angeles and other U.S. cities, organizers said.

No official head count was available. Organizers of the event estimated about 30,000 people participated in San Francisco. It appeared that more than 10,000 people attended the march.

In the shadow of the National Constitution Center and Independence Hall in Philadelphia, a few hundred protesters ranging from grade school-aged children to senior citizens called on President Bush to end funding for the war and bring troops home.
Posted by JerseyCynic at 12:56 AM