Too Naked To Fly? - many opinions- one big question 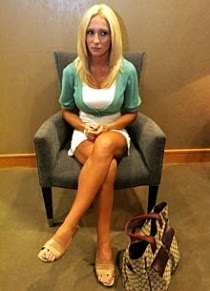 23 year old Kyla Ebbert got on board a SW flight from California to Tucson and the hilarity ensued...

"Kyla Ebbert said a Southwest employee asked her to leave her seat while the plane was preparing to leave this southern California city on July 3 ""You're dressed inappropriately. This is a family airline. You're too provocative to fly on this plane," she quoted the employee as saying. "

Kyla Ebbert is a Hooter's waitress from San Diego. She apparently had some sort of a doctor's appointment in Tucson so she slapped on a Britney Spears like crotch shot outfit and decided to try and catch the short flight.
....
A Southwest Air flight attendant nearly booted the bleached blonde off the plane when it was claimed that she was revealing too much for the "family" airline.

...Well unfortunately for Kyla when trying to convince everyone that her attire was good for any occasion, she flashed her white panties on the Today show as she sat down. I guess the question is was she even wearing panties on the flight? Was she wearing a bra? Matt Lauer blew the interview never asking the questions.

If you've flown on a Southwest flight, you'd know that there is so little leg room that only a fly on the back of the seat in front of you could see your crotch as you sat down in a mini skirt.

Michael Ventre at MSNBC.com offers an anecdote not noted in other articles:

On the return flight, she not only wore the same outfit and encountered no trouble whatsoever from the Tucson-to-San Diego crew, but she told Lauer that one flight attendant actually complimented her.

A million thank-yous to the Southwest Airlines employee who told Kyla Ebbert to cover herself up. It’s a sad commentary on our society that someone has to be told when his/her clothing, or lack thereof, is offensive.

...The issue here is that one human being was revealing so much nakedness as to be disrespectful of other human beings...

And a view from Fox News:

A 23-year-old college student claimed Friday that Southwest Airlines singled her out after a male flight attendant told her that her white denim miniskirt, high-heel sandals and sweater over a tank top was too "revealing."

Southwest Airlines stands behind that flight attendant's decision two months ago to confront Kyla Ebbert, who also works as Hooters waitress in downtown San Diego, after complaints from another employee about Ebbert's choice of clothing.

OH MY! 9/11 Truth Protesters interrupted Geraldo Rivera's interview with Kyla, calling them the "least attractive group of demonstrators I have ever seen." Now where were we Kyla?

Kyla Ebbert, a blond, shapely 23-year-old San Diego coed who also works shifts at a Hooters restaurant, boarded the flight to Tucson, Ariz., on a one-day round-trip visit to an Arizona doctor's appointment. She had settled into her seat when a flight attendant confronted her about what was later described by the airline as "revealing attire."

(snip)
"Southwest Airlines was responding to a concern about Ms. Ebbert's revealing attire on the flight that day," the airline said in a statement. "As a compromise, we asked her to adjust her clothing to be a little less revealing. She complied and traveled as scheduled.

Though she accepted the compromise, Ebbert said she was left embarrassed by the situation, which she said played out in front of fellow passengers -- so embarrassed she requested a blanket to cover herself for the flight.

Other stories say that she left the plane to fix her outfit and was too embarrassed to return. So what is the story? And why does anyone care? I only care because if a simple story like this can be so mangled by the press, what, pray tell is truth these days?
Posted by Liz Blondsense at 8:53 AM