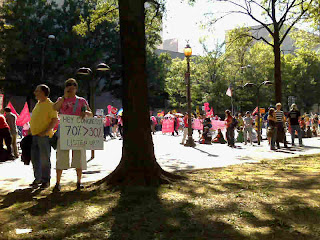 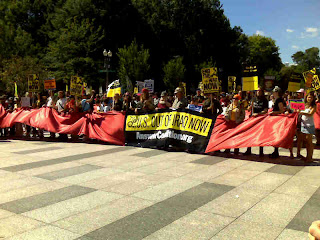 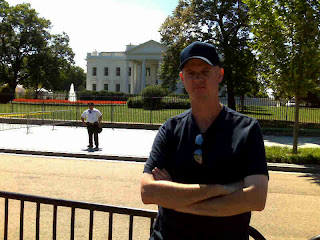 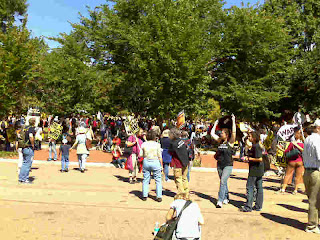 On the latest Pro-Peace March in Washington this past Saturday.

ANSWER did a poor job organizing this one. The march was supposed to step off at 12 noon, but barely got rolling by 2 PM, by which time they were leaking protestors fed up with waiting. They were heading for the Metro. Also, once again, the message was not consistently about the war on Iraq, courtesy of Ramsey Clark. They also gave Ralph Nader a platform. Ugh.

Once again, the media stories suggested that there were equal numbers of pro-peace and anti-peace demonstrators. There weren't. The Gathering of Beagles and Uber-Patriots managed to turn out a crowd that lined three city blocks of Pennsylvania Avenue, one deep behind the barracades, waiving their little Made in China US flags. I estimate between 600-700. They were foul, as usual, screaming obscenities, calling us Osama bin Forgotten's best friend, traitors, the enemy at home, and the dreaded librul, commie, hippie, pinko fags, etc. I saw one fine citizen throw an empty cigarette pack at a demonstrator. Pathetic, that lot. And ironic, considering their ilk does so much to support Communist China when they shop at their local WalMart. Also, as usual, the guy in the Santa Clause suit and the anarchists got all the attention from the print media. Of course, in the main, the crowd looked much more like me (middle-aged, menopausal mothers) than it did the so-called freaks, but wev.
Since I attended my first pro-peace march with Lizzie and BillyDoom in September 2005, the crowds have grown successively smaller. I would say that there were 150,000-200,000 people at that one. I suspect we were lucky if 25,000 showed up for this one, despite the fine weather (low 70s, no humidity). The organizers say 100,000. Bullshit. The Park Police, while not giving an "official" estimate, say about 10,000. Bullshit. As usual, the truth is somewhere in the middle. Maybe we do have Liberal Outrage Fatigue. Maybe we are sick of beating our heads against a brick wall and have accepted that our efforts are futile, that no one is listening, that no one gives a fuck what we think.
For your pleasure, these are the pictures I took with my camera phone. Sorry in advance for the poor quality. And by the way, the fellow standing there in front of the White House in the one picture is our friend, Jim Yeager, TBFKA ("the blogger formerly known as") Mimus Pauly.
NB to Liz: Can you please fix the pictures so they don't string down the page? I've never uploaded multiple pictures and have reached the limitations of my Blogger Dashboard skillz. Grazie!

Posted by Old Dominion Blue at 8:42 AM