and in celebrity news... 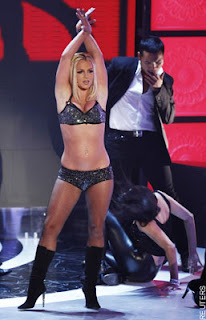 Is it no wonder that females have body issues?
Who the hell has a right to say that Ms Spears looked fat in her terrible performance at the MTV Awards? That's fat? I want to be that fat. Right this very minute.

The NY Post music critic Dan Aquilante and I'd like to see what he looks like, writes Lard & Clear Loser at VMA. Was that crack at her bod necessary? Her performance was supposedly awful and that I'll buy even though I didn't watch the whole thing as they only showed snippets on the news but does everyone have to be anorexic in order to be 'beautiful' in show biz?

With her ditziness and lude behavior in public aside and if I had never seen her before except to look at this picture, I would have to say that she looks like a very pretty girl with a great figure. Yeah, so she jiggled a bit on stage. BFD. Obviously her muscle tone isn't up to par for a dancer and perhaps something with some lycra around the middle would have been more appropriate for a dance number, but it was her whole performance that sucked and why not leave it there?

Whoever wrote the comments on the photos at the NYPost should be ashamed of himself. She looked pretty good from the back too but it was written, "The porky princess shows off her...well, maybe not better side." Oh for god's sake, you'd think she had a cottage cheese butt and was wearing a thong on national tv. The commenters at the NYPost website wrote such nasty things about her figure as if any of those shitheads could get a woman who looks anything like that. feh. If you live in NY and see who reads the NY Post, it's even more laughable that her looks were the subject of discussion. Post readership scrapes the bottom of the barrel intellectually and talk about cottage cheese butts....
Posted by Liz Blondsense at 7:12 AM