This story by Jonathan Hutson at Talk2Action is most unbelievable: Pentagon Adopts Missionary Position on Homoerotic Art

This is just too much for my delicate sensibilities but I'll give it a go.

The War Department is providing our poor troops in Iraq and Afghanistan with frightening "entertainment." It's called OSU or 'Operation Straight Up' ironically. I'm sure it's straight up baby. They are fighting "enemies of Christ" and proselytizing something Jesus doesn't even know what on military bases. They even have tshirts! Oh the tshirts. Oh my. Oh my. I want one. Get me one. (for research)

Imagine if your husband came home from the war with this shirt in his duffle bag?
"Honey, what happened there? Do you still like women?" 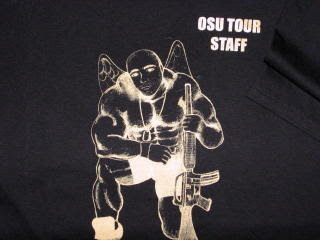 My dad's generation would have kicked the asses of these blasphemers in WWII.

Hey! Do you think that this was the kind of angel that was visiting Lot in Gomorrah that the townsmen wanted to have sex with? Oh my. But where's his neck? Where's his football helmet?

Is this what Jesus had in mind in his Sermon on the Mount? I must have missed something. Maybe he said that the Peacemakers will kick ass and it was mistranslated by the pansy liberals.

And what in heaven's name is going on in this shirt below? 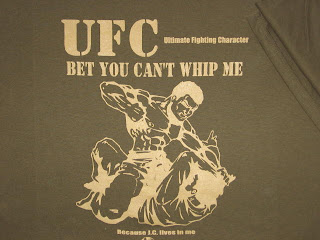 It says "Because J.C lives in me" and "Until every soldier hears the truth: OSU Tour"at the bottom. Oh my. That's blasphemy for sure. There's more at the link. I can not post any more of this filth.

There are 3 hour live entertainment shows (oh god, no) held in auditoriums for the troops. Speakers include the likes of Stephen Baldwin (the retarded looking brother), some former NFL'ers and retired commanders. They are given (gag again) "freedom packets" with the Left Behind video game so that they kick heathen ass in their spare time and convert to a life much like Christ's. Indeed. I wonder if anyone actually reads the Gospels during these meetings? Nah. I wonder if they do a Village People type show?

HELP! I can't stop snarking. The snarky bug bit me. I watched Jesus Camp yesterday and I was going to post my horror at that movie (especially at Ted Haggard's lip gymnastics), but this takes the cake. I am forwarding the article with the pictures to my newspaper. My tax dollars at work. Ewww. I have to barf.
Posted by Liz Blondsense at 12:36 AM