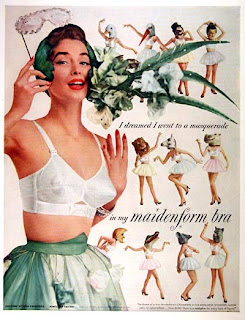 Necessity is the mother of invention, isn't it?
Women's breasts have always been a concern for inventors. What's a little world strife when you could be knocked out by a couple of unharnessed knockers?

I loved my maidenform bra. As you can see from the picture, it shapes women so naturally. What on earth could be better looking during the cold war and then the age of the GWOT than a couple of torpedos on a girl's chest?

Bras can be pesky though. Sometimes they pinch. ow. Sometimes the straps dig into your shoulders. ow.
And they are unsightly when you want to wear a strapless gown.

But they are a necessary evil as gravity takes its toll and one needs super strong straps to hold the girls higher than your waist. The important thing is that you can still look great in clothes and catch lusting leers from strange men when you need it the most.

The worst part happens when you meet a guy at a bar and you take him home (or go out to his car) and he wants you to lay down and take your bra off so he can delight in what he thought was a great pair, and you see his little smile turn into a frown when the girls retreat to your armpits.

Sure, you thought of breast augmentation surgery because that will make you feel much better about yourself because "what defines a woman more than her breasts?" Right? But you have a fear of the knife and fake ones feel so, so fake. But then again they stand up at attention even when you're flat on your back. You're almost convinced to go under the knife until the surgeon tells you that eventually even the fake ones begin to sag.

What's a girl to do? 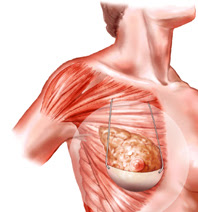 Israeli researchers have figured out a way to install your bra inside you!

Cohen, who served as an Israeli Air Force captain for seven years before entering the business world heard about the MIM concept from its inventor Dr. Eyal Gur, head of microsurgery at Tel Aviv's Ichilov Hospital.

"I call it an internal bra," Gur told ISRAEL21c. "All women are looking for the right bra that will hold their breasts in the position they like or prefer aesthetically. There's an increasing trend towards buying push-up bras to enhance the upward breast pull.

"So I was thinking that with a harness created from materials used in medicine - silicon, threads and very small anchoring screws - we could support breast tissue and avoid further breast sagging."

The procedure is minimally invasive requiring two small openings through which the device is attached to the ribs."

Fabulous. Sign me up.
Men are just so darn sympathetic to the plight of women. At the moment these marvels are being tested on pigs.
Posted by Liz Blondsense at 11:03 AM