Who do they think the Pope is? Bush? 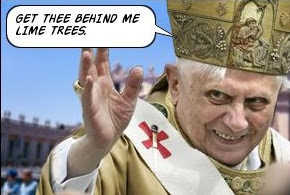 He probably doesn't have a say in this but when the previous Pope, John Paul II visited a shrine in Mariazell, Austria in 1983, "4 stately lime trees were ceremoniously planted" near the shrine in his honor.

Next month, when Joey Ratz Pope Benedict XVI visits the same shrine, the commemorative trees will be chopped down to "make room for a 52 1/2-foot-high steel grandstand to accommodate some of the thousands of pilgrims who will flock to the shrine town of Mariazell, 60 miles southwest of Vienna."

The event will last a few hours.

A church spokesman insists that the RCC doesn't sacrifice trees. Mariazell officials say that some more trees may need to be felled to make room for 30,000 pilgrims but also say that the plaza was going to be redecorated anyway.
Posted by Liz Blondsense at 10:55 AM