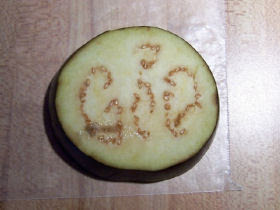 It's another miracle. God wrote his name in a woman's eggplant.
The woman saved this particular slice, called the media, ate the rest of the eggplant and declared the dinner divine.

How does this story coincide with the resignation of Karl Rove?

-------- UPDATE I--------
The Dark Wraith in all his snarkastical wisdom had an equally compelling revelation just yesterday. He got hungry after reading the above post.

Quoth the Dark One: "I decided I was hungry. I went to the refrigerator and grabbed a banana. When I peeled it, I couldn’t believe what I saw. I took a picture to preserve the moment; then I ate the banana.

It’s subtle, and I have no doubt people will dispute what is there, but I think the discerning observer will agree that the message is clear." 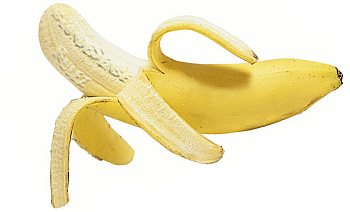 I don't have a f**king clue what he's talking about. I don't see anything.

UPDATE II
Sister Nancy Beth Eczema over at Edicts of Nancy has this to add:

"A little known fact that the MSM outfit reporting this story won't tell you is that eggplants are well-regarded accessories to the homosexual lifestyle. What meeting of radical homosexual activists would be complete without smoked Japanese eggplant & goat cheese canapés? Think about it: Have you ever seen a straight person buy an eggplant? I think not. This is clearly Satan's trickery, and countless millions of earnest Christians who read this story will be deceived into eating eggplant under the mistaken impression that it will bring them closer to our Savior, rather than being the path to Moral ruination that it truly is. Had The Lord really wanted to appear to His followers, He would have shown up in some hearty American fare like a side of beef or a 22-piece bucket of Kentucky Fried Chicken, not some wussified vegetarian dish. Praise Him!"

Posted by Liz Blondsense at 6:29 AM