No one goes to a fair for steamed broccoli 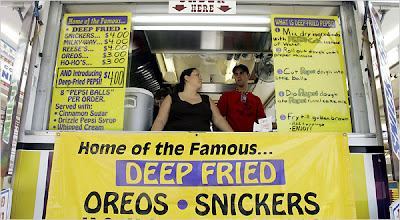 The NY Times has a story about the Great Indiana State Fair because of the new ban on Trans Fats in the oils used on the food there. Did it create a hardship for the vendors? Did the food taste different? Was it more expensive to produce? Why are the health police at a State Fair? Indeed.

Forgive me for being so naive but I had no idea that such cuisine existed in America as depicted in the photo above(click to make it larger). I hadn't heard of deep fried Snickers (except in Scotland) and deep fried Oreos, Reeses, Ho-Ho's and Milky-way bars. They even have deep fried Pepsi! That's almost as interesting as deep fried ice-cream (which I have tried in a restaurant out of curiosity, although I felt that it was merely gilding the lily).

I suppose that the irony here is what is being fried. Sure the "officials" don't want their citizens to get fat and have heart attacks so they jumped on the 'trans fats ban' made popular in NYC (home of clean living), but it's not like these are Tempura stands where a change in the oil would make a difference in one's propensity towards a fatal coronary. I mean, WTF.

“This is a slice of heaven,” said Ryan Howell, 31, as he cradled his Combo Plate, which, for the record, consists of one battered Snickers bar, two battered Oreos and a battered Reese’s Peanut Butter Cup — all deep-fried in oil that is trans-fat free, thank goodness.

The Health Nazi's have no credibility when they ban the use of trans fats when we're talking about frying foods that are made with trans fats and other artery cloggers or ban outdoor smoking in urban areas. Consistency is the name of the game when trying to affect change in a society. The above example of healthy eating is just laughable.
Posted by Liz Blondsense at 11:20 AM