Musings from an island girl

Even on a good day, it isn't easy to get off Long Island (one reason I don't leave all that often unless it's in the middle of the night). God forbid a catastrophe would hit, it would be best to pass out cyanide pills. There is no plan to actually evacuate Long Island as that would be near impossible but there is supposedly a plan to move residents from low lying areas to higher ground (not that we have a lot of higher ground nor is it easy to get there.) By the way, it's aggravating as hell to actually get to this island from the mainland.

I don't know exactly how many people reside on the island in total, but it's more than many states and we only have a couple of bridges to the actual mainland (The Bronx- a traffic nightmare made in hell). More exits were planned but the good folks who live in coastal communities didn't want any stinking bridges in their backyards which were probably under water yesterday. After that, there are bridges and tunnels to other islands such as Manhattan and Staten Island and then more more bridges and tunnels to New Jersey, yet another traffic nightmare and a flood zone when there is a sprinkle. Pretty pathetic when you come to think about it. Why do I pay tremendous taxes to live here? I dunno. I was born and raised here. What confuses me is why so many people move here. Sure, we have fabulous water recreation, but still...

Yesterday I awoke to terrible storms, one after another for hours and hours. My kitchen was under 2" of water as I learned exactly where my roof was most vulnerable. I learned that the chimney for the fireplace in the kitchen is a water conduit. I watched everyone's Newsday's floating down the river that was once my street. Luckily it wasn't garbage day. This is the second time in 2 weeks that I have seen anything like this. We lost tremendous trees in my neighborhood in a freak storm only 2 weeks ago. I can't remember a time since the summer of 1985 that we've been inundated with watery storms in the center of the island. We were under a tornado watch and one struck a village in the next county over yesterday. I don't have a basement for shelter and if I did it wouldn't have been under water anyway. While my island was becoming one with the ocean and 5" of rain fell in my neighborhood, I watched the Senate on CSpan spell doom for our troops.

Some pictures of my neck of the woods courtesy of Newsday: 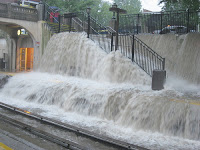 And so much for mass transit
Posted by Liz Blondsense at 7:56 AM