How to transport a dime 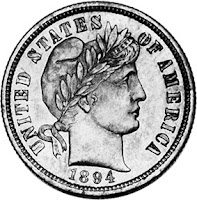 The 1884 S Barber dime is very rare because only a few were minted and were made as gifts by the minter. It's not a pretty dime. In fact Liberty looks pretty awful. One just sold for $1.9 million dollars. It traveled across the country to meet its new owner.

It was a flight filled with tension for the coin dealer charged with delivery.

He was too nervous to sleep, he said. He did not watch the in-flight movie, which was "Firehouse Dog.'' He turned down a Reuben sandwich and sensibly declined all offers of alcoholic beverages.

Shortly after boarding the plane, he transferred the dime from his pants pocket to his briefcase.

"I was worried that the dime might fall out of my pocket while I was sitting down,'' Feigenbaum said.

All across the country, Feigenbaum kept checking to make sure the dime was safe by reaching into his briefcase to feel for it. Feigenbaum did not actually take the dime out of his briefcase, as it is suspicious to stare at dimes.

He does recall fishing around -- somewhere over the Rockies, over the Midwest, and over the Alleghenies -- for the dime. For the rest of the flight, he kept his flip-flopped foot planted on the briefcase and his eyes wide open.

Read the story at SF Chronicle for a good chuckle: 'I didn't eat and I didn't sleep'
Posted by Liz Blondsense at 8:45 AM