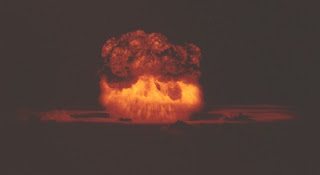 August 6th is the 62nd anniversary of the atomic bombing of Hiroshima, so while I was arranging for black party favors I saw this editorial from the Japan Times:U.S. owes A-bomb apology

Read the article; it is an interesting insight into the Japanese Government's reasoning behind its own nuclear non-proliferation stance (even though it conveniently turns a blind eye to allowing nuclear-armed US warships to use its ports). Here's the money quote:

"To end the vicious cycle of nuclear proliferation, the U.S., the first to use nuclear bombs as a weapon of war, should apologize to Japan for the bombings and pledge to abandon all nuclear arms."

Got that? The editorial writer's opinion is that the United States of America apologize to the Japanese for dropping the first uranium and plutonium devices on their cities, as a way to start the ball rolling on a worldwide disarmament strategy.

First, a bit of historical context: Wars that start with a undeclared, or 'sneak' attack will usually not end well, and usually require both combatants to sink into real depths of competitive barbarism. We were attacked by the Japanese, and spent a boatload of money in developing these bombs. Some thought that it would have been wasted money and effort if we hadn't used them, while others pointed to the projected casualty figures for Operations Coronet and Olympic.

We did not attack Japan at Pearl Harbor. We didn't start the war - but we finished it. It is up to the vanquished to apologize first. It's just good manners.

Third, let me say this about the "cycle of nuclear proliferation:"

You can't stop it.

Whenever a new piece of technology comes along, people just fester to get their hands on it. For any number of purposes. Take gunpowder, for example. Gunpowder started the development of modern arms (or we'd still be carving road tunnels with chisels and shooting each other with crossbows). There was no way to stop it - as soon as some half-bright serf with a handcannon and his ammunition fell into enemy hands, the search was on to reverse-engineer the stuff and find out how to make more.

Various scientists in several countries (even Japan) were working on the idea of nuclear fission as a viable weapon way back in the 30s, showing just how hard it is to stop the spread of ideas. However, only one nation had the resources to actually bring the device to fruition - the United States.

So, let's wind the clock back and see what the Genie did after we let it out of the bottle, shall we? For starters, the secrets of the Bomb were leaked to the Soviet Union. Great Britain and France developed theirs mostly on their own (Britain had aided the US in the Manhattan Project, and France had the son of the great Madame Curie to do the heavy lifting - and France has natural supplies of uranium). And US President Eisenhower, in his "Atoms for Peace" project, freely gave out nuclear reactor technology to developing nations so they could modernize.

One of the bad things about nuclear reactors is its waste product, which includes plutonium. So it was only a matter of time before smaller nations started using reactors as seedbeds to produce oralloy (highly enriched uranium) and plutonium.

The first nation (that we know of) to start this process was Israel, who is doing it for defense reasons (we hope, as the United States has consistently blocked UN attempts to see what's going at the Israeli reactor site at Dimona - a site that the Israelis are so paranoid about that they shot down one of their own planes after it accidentally overflew the area).

Pakistan and India followed suit, as did North Korea (although I laughed when I found out the estimated yield - a measly 500 tons, or half a kiloton).

A couple years ago the United States put up on the Internet a whole bunch of documents relating to Saddam Hussein's WMD programs. After a while, someone noticed that the recipe for nerve gases were on those documents, handily in Arabic. When this was brought to the US's attention, the papers were removed from the site. Last year, a minor foofaraw resulted when another survey of the posted documents showed the actual blueprints for an implosion device, including the all-important equations that cover the amount of fissile material and the tampers. This material, too, was taken down rapidly. But who could have read it and printed it out BEFORE it was deleted? No one knows.

You can not put the Genie back into the bottle.
Posted by Walt at 11:09 AM