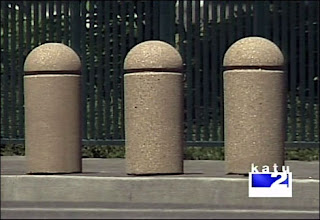 The city of Keizer, Oregon had a minor problem - pedestrians needed to be protected from speeding cars. So they bought and had installed these concrete posts. Problem solved, right?
Wrong.
To quote the article, "A number of residents have complained to the city that the posts resemble male genitalia."
Well, in a sexually repressed society such as our own, EVERYTHING looks like genitalia, from orchids to skyscrapers.
Now it gets weird. The city wants to disguise the phallic shapes of the posts by decorating them with steel collars and chains.
One woman stated that her son suggested they could be used as sex education aids, by covering them in plastic.
Posted by Walt at 10:03 AM