What the Hell Is 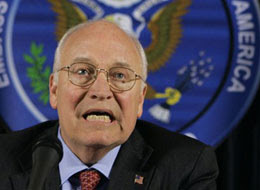 This, believe it or not, is not a raving psychopathic with a United States Embassy seal photoshopped behind him. This is the 46th Vice President of the United States, the "honorable" Richard Cheney.

This so-called honorable man, who has sworn - twice! - to uphold the Constitution and laws of the United States, has done more to circumvent that very Constitution and those very laws than all of his predecessors combined.

He has ramrodded Executive Orders past his all-too-willing dupe, the hapless Distracter George W. Bush, who has dutifully signed everything thrust under his nose.

He has snarled and hissed like a rabid wildcat at any who dare criticise or question His Supreme Authority.

He has had his underlings make the startling assertion that his office is not subject to oversight or scrutiny, and is essentially above the law.

He has had his underlings assert, beyond all good sense, that his office is not part of the Executive Branch but a fourth part of our government (something that would make James Madison spin in his grave if he weren't already).

This disgusting creature who dares sully our government deserves to be impeached and removed from all political office, then brought to criminal trial for treason and fraud.