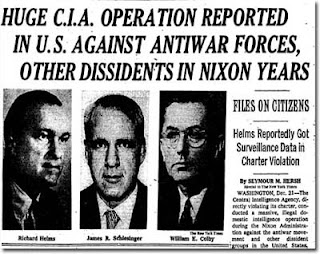 The Central Intelligence Agency violated its charter for 25 years until revelations of illegal wiretapping, domestic surveillance, assassination plots, and human experimentation led to official investigations and reforms in the 1970s, according to declassified documents posted today on the Web by the National Security Archive at George Washington University.

It's all there at the National Archives for you to read online or download.
The highlights (if you want to call them that) are:
There is also information about:

None of this surprises me. I just have to make a few phone calls to apologize to people I accused of being paranoid conspiracy theorists way back when.
Posted by Liz Blondsense at 10:07 AM