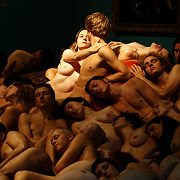 No Sex Leads To No Sex -German Love Study

You know those super people who are always involved in one project or another, are working long hours and yet volunteer for everything? They are compensating for their lack of sex. So those of us who don't work that hard and don't do much of anything extra-curricular are relaxed and sexually satisfied like the people shown here?

"Ragnar Beer of the University of Göttingen surveyed almost 32,000 men and women for his Theratalk Project, which has found that the less sex you have, the more work you seek. Indeed, the sexually deprived have to find outlets for their frustrations: they often take on more commitments and work.

And, to make matters worse for sexless workaholics, the extra work cuts into their would-be sex time. "Sexual frustration prevents you from being able to reduce your stress," Beer observes. In other words, no sex leads to even less sex."

Brilliant observation. Thank god for scientists or we wouldn't know what we already know.
Posted by Liz Blondsense at 8:41 AM