The Massacre At Jamestown's 400th Anniversary 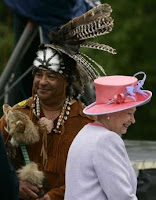 Queen Lizzy sports a girlish grin after a Native American man tells her she looks good for 400.

Queen Lizzy sits for a demonstration of how native Americans defended themselves against her people. 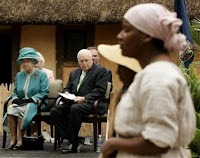 Queen Lizzy and Dr Evil enjoy a presentation by an authentic African American.

George tells a local man that he can make a funnier face.

George demonstrates how they used to dance in the olden days. 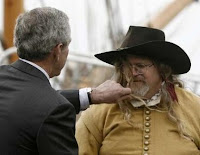 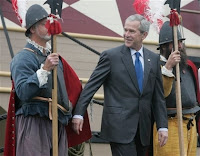 George tries to get a rise out of an actor playing a guard.

George inquires about purchasing the soldier's hat and cape to wear during his next press conference.

The First La La exhorts her husband to put the gun down before he hurts somebody.