I don't know who I should be more afraid of 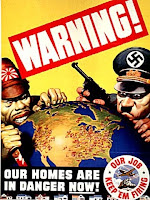 It is reported by Max Blumenthal at Raw Story that our leader met with about a dozen "christian right" leaders to rally support for his wars and the threat of Iran. It's pretty sad when the leader of the free world has to rally fringe religious groups to support his policies. You'll get a pretty good taste of the "fine" intellect of the fundies who support "christian right" leaders when they can talk like this on their radio programs:

“I heard about this danger [from Iran] not only at the White House but from other pro-family leaders that I met during that week in Washington. Many people in a position to know are talking about the possibility of losing a city to nuclear or biological or chemical attack. And if we can lose one we can lose ten.

"If we can lose ten we can lose a hundred," he added, “especially if North Korea and Russia and China pile on.”

“The world looked at Hitler and just didn't believe him and tried to appease him the way we're hearing in Washington today,” Dobson remarked. “You know, the President seems to me does understand this, as I told you from that meeting I had with him the other day, but even there it feels like somebody ought to be standing up and saying, ‘We are being threatened and we are going to meet this with force -- whatever's necessary.’”

Dobson continued, “Some of our listeners might not like that but I tell you, if we didn't stand up to Hitler, we'd be speaking German today.”

And if we don't stand up to Mahmoud Ahmedinejad, we'll stop plucking our eyebrows.

"When you're in the military, that comes first. You don't want to not have gone and find out your wife has to wear a burka," speaking of maniacs with radio talk shows, Dr Laura Schlessinger commented to Army families at Fort Douglas in Salt Lake City, where she praised fathers who leave their families to fight for the nation.

"He could come back without arms, legs or eyeballs, and you're (whining)?" Schlessinger asked before taking the stage at the base theater to host her daily program on ethics, morals and values. "You're not dodging bullets, so I don't want to hear any whining -- that's my message to them."

Who's ethics, morals and values?

Posted by Liz Blondsense at 7:53 AM