Do Not Bite the Hand That Created You 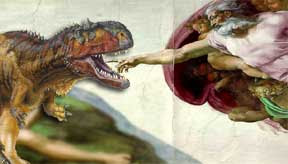 The $27 million Creation Museum, “Answers in Genesis”opens this weekend in Petersburg, Kentucky. If you've got no big plans for this Memorial Weekend, I suggest that you go and then give me a full report. The "museum" website touts:

A fully engaging, sensory experience for guests. Murals and realistic scenery, computer-generated visual effects, over fifty exotic animals, life-sized people and dinosaur animatronics, and a special-effects theater complete with misty sea breezes and rumbling seats. These are just some of the impressive exhibits that everyone in your family will enjoy.

This article at WCPO reveals names of people who have attended the museum already and thought it was great. (Jersey Cynic, get them on the phone for me.)

There's a website devoted to debunking “Answers in Genesis Museum” and they will hold a Rally For Reason at the gates on opening day, Monday. They do not challenge the "museum's" right to exist, only to show that there are some people who do not believe in creationism and that it defies logic. Ken Ham is not afraid of them.

Ken Ham is the founder of the creation "museum." I'm not sure if he is a direct descendant of Noah's son Ham. (I will have to do some fact checking.) Mr Ham believes that since the world was created in only 6 days, mere thousands of years ago, that dinosaurs must have existed in the Garden of Eden and that dinosaurs only went extinct a few hundred years ago as evidenced in the painting of the Last Supper (see detail below). 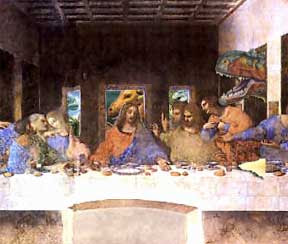 If you go to the museum you will find out exactly what caused dinosaurs' extinction. This roused my curiosity. I hope that many paleontologists will visit that exhibit and report back to me.

See also this article at Counterbias which explains more about the exhibits and explains the neurological disorder present in those who prefer fairy tales to science- and whose religion dictates that one dismiss whatever faculties of reason were present when they were born.

Did you know that Creationists consider those who believe in science and evolution are at the root of all evil in the world? I did not know that. Now I do.

I'd really like to visit the planetarium at the Creation Museum and see a demonstration of how the dome that covers the flat earth works close up. I wonder if you can see the gears? 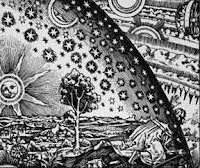 I don't know who to believe. The Flintstones or Disney World. There were no humans in the dinosaur exhibit in Disney World, yet there were humans living in harmony with dinosaurs in the Flintstones. I'm so confused.

Nevermind, the Simpsons explained it all here and here and here. Thank God for You Tube.
Posted by Liz Blondsense at 7:56 AM