The Antichrist Is Back Where He Belongs 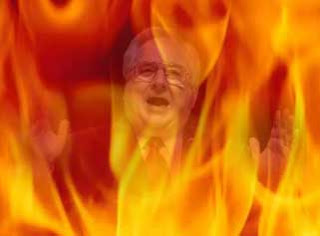 Jerry Falwell will soon be forgotten.

He never achieved the status that Satan had hoped he'd achieve while on earth in most of the 20th century, but Jerry Falwell did his damnedest to capture the minds of the ignorant and ignite intolerance. While he won't go down in history as the man who destroyed the concept of loving one another or peace on earth goodwill to men, he will be noted for this brief time in history as being one of the tools used by freedom hating, war loving, media manipulating, stupid white men. Unfortunately he leaves a college on earth that will go on to taint young minds based on a book that was meant to teach love and forgiveness but was used to foment intolerance, greed and hatred.

Let us now take a moment to remind ourselves one last time of the vile anti-American and anti-Christian spewage from this man and then let it go. If you are a person of faith, be sure to thank God for removing this pitiful excuse for a human being from this earth:


Quotes courtesy of ThinkExist.com
Posted by Liz Blondsense at 7:23 AM