They just seem so happy to be back in the UK

The British Marines and Sailors who returned to the UK from their harrowing ordeal as hostages in Iran were given statements to read to the press.

Here's a snippet of the full statement:

"On arrival at a small naval base, we were blindfolded, stripped of all our kit and led to a room where I declared myself as the officer in charge and was introduced to a local commander.

"Two hours later we were moved to a second location and throughout the night were subjected to random interrogations. The questions were aggressive and the handling rough, but it was no worse than that.

"The following morning we were flown to Tehran and transported to a prison where the atmosphere changed completely. We were blindfolded, our hands were bound and we were forced up against a wall. Throughout our ordeal we faced constant psychological pressure.

"Later we were stripped and then dressed in pyjamas. The next few nights were spent in stone cells, approximately 8ft by 6ft, sleeping on piles of blankets. All of us were kept in isolation.

"We were interrogated most nights, and presented with two options. If we admitted we had strayed, we would be on a plane back to the UK soon. If we didn't we faced up to seven years in prison. We all at one time or another made a conscious decision to make a controlled release of non-operational information.

"We were kept in isolation until the last few nights when we were allowed to gather for a few hours together, in the full glare of Iranian media." 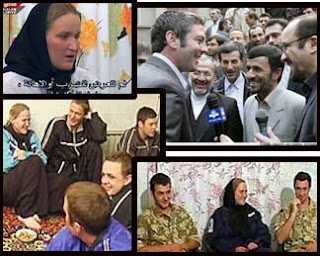 Oh my look how tragically these kids were paraded before the media in Iran.

Here they are back home again. Relaxed and happy to be free again.

Posted by Liz Blondsense at 9:54 AM