Don't let the screen door hit you in the ass on your way out, Wolfie 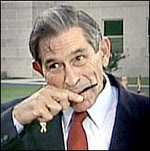 The architect of the clusterfuck from hell in Iraq has been asked to step down by the World Bank over the pay scandal in which his "girlfriend" was paid nearly $200,000/year for goddesss only knows what. In addition, the World Bank staffers and the board objected to Paul Wolfowitz' management style as well as his appointment of other neocon Republicans to his inner circle.


More at ThinkProgress. "Don't hate me because I launched the Iraq war."

Hate is such a harsh word. We hate the war, not the comb licker who started it.
Posted by Liz Blondsense at 7:37 AM