Like it wasn't bad enough that the RAF flabbergasted Top Guns with the suggestion that they perform suicide missions... the Top Guns replied, "After you, sir."

And the British government's faux astonishment at how the Iranian's are parading their hostages on video to the world... 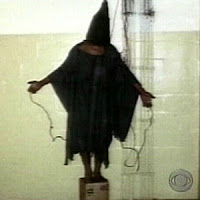 The Telegraph reports: "Channel 4 said today that it was considering delaying a controversial drama about British soldiers abusing Iraqi captives after fears it could harm negotiations to secure the release of navy personnel held in Iran." Gee, ya think?
Posted by Liz Blondsense at 9:14 AM