The Pope In The News 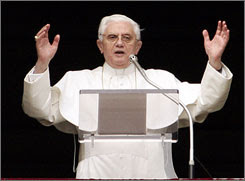 For all you Catholics and recovering Catholics out there, Pope Benedict has been in the news an awful lot lately. What on earth is he up to? Does he have any plans to save the world? Not really, there's nothing new here.

There is no reason for Catholics to put their thinking caps on as the Vatican spells it out for you:

Healing the rift
The Pope hosted Vladimir Putin in order to see if they can ease the tension between Roman Catholics and the Russian Orthodox Church. Good luck. This will be like trying to reconcile Israel with the Palestinians.

Gay marriage and abortion still most important moral issues of our time.
Pope Benedict would like to remind Catholics and RC politicians that the most important issues of the day are the church’s opposition to abortion, euthanasia and gay marriage. These values are non-negotiable.

Celibacy is still required for priests.
The Pope went on to remind priests that celibacy is still absolutely required. Even in areas of the world where there are very few priests, he exhorted Bishops not to "lower" the requirement and allow married priests. He didn't mention that homosexual relations are considered non-celibate. I'll have to ask him about that.

Beware False Prophets
The Pope doesn't like Bob Dylan. He said so in his latest book but doesn't give the exact reason.

Faithful ought to take up chanting
He does like Gregorian Chants and would like the faithful to take up chanting.
I saw a PBS show featuring a group of Gregorian chanters performing contemporary songs. I particularly liked their rendition of REM's "Losing My Religion."

Don King to meet the Pope
Jesus H Christ must be rolling in his whatever, Don King, the one with the hair, will have audience with the Pope on March 21- something about helping a boxer who lost a fight or something. Don King is not sure if he will wear one of his 3 diamond encrusted crosses.

OT: Speaking of Bob Dylan, have you seen the commerical for the new movie with Adam Sandler "Reign over me" playing a guy who lost everything on 9/11? Who does he look like? 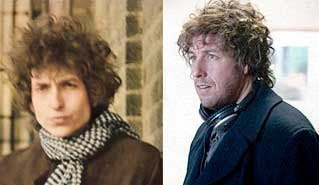 Posted by Liz Blondsense at 8:47 AM