Baby, baby, where did our love go?

The Bush administration responded with shock to King Abdullah’s declaration that the U.S. is “illegitimately” occupying Iraq. “We were a little surprised to see those remarks,” said Under Secretary of State Nicholas Burns. White House spokesman Dana Perino claimed, “It is not accurate to say that the United States is occupying Iraq.”

Then what is accurate Dana Perino? Please tell us. 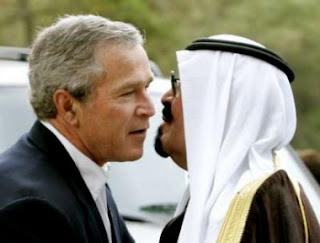 You are a more ruthless dictator than I am, Bushie.
You, my dickless f(r)iend, possess no kingly skills. Your breath smells like camel farts and I will not kiss you this time. We will hold hands and walk in the park instead. 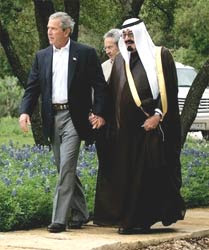 Oh my goodness. What went wrong?

The president was to host a gala for Saudi Arabia's King Abdullah on April 17, much to my nausea. Bandar bin Sultan (alias Bandar Bush) flew to DC last week to explain that the date was not convenient. WaPo's Jim Hoagland gives you the scoop. Also Jordan's King Abdullah has let the WH know that he can't make it for dinner this September.

"In beloved Iraq, blood flows between brothers in the shadow of illegitimate foreign occupation and hateful sectarianism, threatening a civil war," he said, in unusually strong criticism of the United States from a strong ally.

But Abdullah's focus was mostly on the Israeli-Palestinian conflict, which Sunni Arab leaders see as a major cause of violent radicalism in their own countries and threat to regional stability."

OMG, did they read my blog? It's about time.

But what's this about Persia?
This is interesting: Iran planning to stop using U.S. dollar to price oil
brace yourselves.

UPDATE: Condi was snubbed by Israel. "It refused her offer to act as negotiator between its government and the Palestinian authorities."

Posted by Liz Blondsense at 9:39 PM