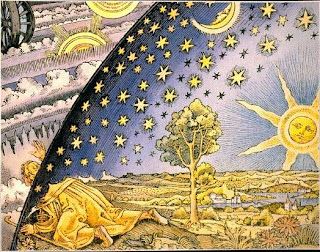 I once thought that FixedEarth.com was a satire site. They don't believe in evolution or revolution (of the earth.) Hence the title of the site, "The Earth Is Not Moving"

It claims that evolution is a Jewish conspiracy, of which Copernicus was associated, to undermine the Bible (Genesis' creation myth, which I thought was written by Jews?)

FixedEarth.com claims to "confirm that the Copernican Model of a rotating, orbiting Earth is a factless, observation- denying deception that is the keystone which is holding up all of modern man’s false "science" and "knowledge"." They want to make it illegal to teach evolution in schools. They claim that Christian Zionists are poised to dictate middle eastern policy based on the Bible.

Georgia Legislator, Rep. Ben Bridges believes it and sent a memo to a Warren Chisum, the second most powerful man in the Texas legislature and head of the appropriations committee, who then forwarded the memo to the rest of the Texas legislature. Here is the cover letter from Chisum and here's the memo from Bridges. oy vay.

The Texas Legislature condemned the memo and the ADL found out about it and the shit hit the fan. Warren Chisum pretended to apologized for insulting Jews and claimed that he didn't know about that part nor did he actually read the website, “I read it, but he didn’t ask me to edit his memo,” he said. “It does not reflect my opinion.” oh really? That seems totally irresponsible. He should be fired.

There needs to be a TDL (Texas Defamation League).
Texas legislators are steamrolling the citizens of Texas. Texas Jaye in a post here on Blondesense February 12, details the horrifying statistics proving that Texas legislators give less than a shit about children, the middle class, the education and the environment of Texas. It's a disgrace. And more disgraceful is the bill Chisum has coming to vote on Monday, according to Burnt Orange Report:

"Children with no health insurance, Texas families who can't afford state colleges, crumbling schools -- to Chisum they are about as important as Pluto, a heavenly body no longer even called a planet. I am not advised whether Chisum believes in other planets.

"House Calendars has set the vote on Chisum's HB2 for Monday afternoon. The bill would strip about $6 billion from general revenue to fund a big hunk of a massive 2008-2009 property tax cut for the wealthy. (The rest of the $14 billion windfall for the wealthy comes from the puny business tax passed last year that has fallen way short of funding the property tax cut as promised.)

It's clear Chisum's god, Craddick, doesn't want to fiddle around with open and public debate about whether the Legislature ought to stop strangling of the middle class before it tightens its grip on our throats and transfers more middle class money to the rich.

The last thing Texas needs is to cut property taxes of the wealthy. It's clear that "christianistas" in government in many southern states know all about conspiracies. They ARE the conspiracy to undermine the people, tax the hell out of them, oppress them, dumb them down in the name of the Bible or religion all for the benefit of the wealthy few. The flagrant oppression of the middle class and the predominance of the undereducated working poor in states like Texas is unconscionable.

Here's more on the subject (with fascinating comments), and more here from TPM, where we find out that Rep Bridges, a retired HS teacher (gawd help us), according to the Atlanta Journal Constitution, says he agrees with the Kaballa anti-evolution conspiracy more than Darwin or the Big Bang.
Posted by Liz Blondsense at 9:00 AM