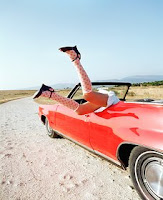 Sex in fast lane halts traffic on road
Sun Feb 18, 12:24 PM ET
JERUSALEM (Reuters) - Israeli police investigating why a car was blocking traffic in the fast lane of a major highway Sunday found a couple inside having sex.

A police spokesman said the female driver and her male passenger gave in to their passions without pulling over to the side of the road, causing congestion and leaving other motorists having to swerve to dodge their stationary vehicle.

A patrolman gave the woman a ticket for holding up traffic.
Posted by Liz Blondsense at 8:37 AM