Is it love? Is it infatuation? Is it obsession? 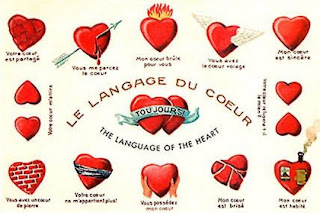 Whatever it is, a new romance brings on almost intolerable levels of chemical reactions in our bodies that eventually subside and leave us blue.

An Affair of the Head by Neely Tucker at WaPo explains the brain chemistry- dopamine: romantic love, norepinephrine: infatuation. Love chemicals affect the same part of your brain that a cocaine rush does. It's something that is programmed not to last either. And it's a good thing that it doesn't last. The species wouldn't survive if we were always head over heals "in love." When you're in love, everything is moved to the backburner of life. Consider this:

Abelard to Heloise: "So intense were the fires of lust which bound me to you that I set those wretched, obscene pleasures, which we blush even to name, above God as above myself."

She to he: "Even during the celebration of the Mass, when our prayers should be purest, lewd visions of the pleasures we shared take . . . a hold on my unhappy soul."

Oh my. Love is obsessive compulsive. The best love songs and poems are written under the influence of dopamine and norepinephrine and:

Serotonin, another neurotransmitter in the brain associated with obsession, depression and racing thoughts, was greatly affected -- right down to the molecular level -- by romance and surging dopamine. People newly in love and people with obsessive-compulsive disorder showed the same lowered levels of the "platelet 5-HT transporter." In other words, dopamine appears to suppress serotonin, which in turn triggers obsessive-compulsive thought patterns.

And it's no wonder we are so let down and "blue" when these feelings go away. And it isn't the fault of your beloved or your fault. It's science: "Oxytocin and other chemicals kick in, running around your brain to make you bond with your lover, producing a mellower, more sustainable relationship." Mellow? After all that? Then the best "You don't love me anymore" songs are written. A whole musical genre was born: The blues.

"Dopamine leaves the scene of the affair, now running off into the nucleus accumbens, the insular cortex, the lateral orbitofrontal cortex, research by Fisher and others shows. Jilted lovers' brains now light up in these areas when they look at pictures of their former flames -- this brain matter is associated with taking big risks, addiction, physical pain and obsessive-compulsive disorders. This is why, researchers theorize, people become obsessed with lost love, and are driven, in extreme cases, to stalking, suicide, homicide, rubber tubing."

Oh my. Oh my. Now aren't you happy that you aren't "in love" this Valentine's Day?

Something told me it was over
when I saw you and her talking,
Something deep down in my soul said, 'Cry Girl',
when I saw you and that girl, walking out.
I would rather, I would rather go blind boy,
Than to see you, walk away from me child, and all.
Ooooo So you see, I love you so much
That I don't want to watch you leave me baby,
Most of all, I just don't, I just don't want to be free no
-Etta James

Posted by Liz Blondsense at 7:50 AM