Billions Down the Money Pit

It sure took the congress long enough to investigate the billions that went missing in Iraq. How surprising it is that the previous "conservative" congress ignored requests for an investigation. Not. But real conservatives do care... and anyone with sense.

Remember the missing $12 billion?
The new Chairman of the Oversight and Government Reform Committee, Rep. Henry Waxman is investigating L. Paul Bremer III (Presidential Medal of Freedom winner) who was accountable for billions in Iraqi funds, yet couldn't account for it. Bremer's excuse was that it was only Iraqi money. It came from a UN oil-for-food program and seized Iraqi assets and was supposed to be spent to help the Iraqi's. But how could he be so irresponsible? Bremer said, "I arrived in Baghdad at a time when much of the city was burning. Looting was still widespread. My responsibilities were to kickstart the economy."

Waxman is concerned that the money fell into enemy hands and wants to know what happened to it. Republicans countered that this is just old news and that the money was needed in a rush to prevent a collapse of the economy. Indeed it is old news, but it was never investigated. Waxman revealed that "$12 billion in Iraqi money was converted to dollars, held in the Federal Reserve Bank in New York and shipped in pallets to Baghdad that totaled 363 tons." Inquiring minds want to know what happened after that. 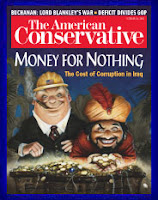 Let's look at the "old news".
Back in October 2005, American Conservative Magazine reported:

Once in Iraq, there was virtually no accountability over how the money was spent. There was also considerable money “off the books,” including as much as $4 billion from illegal oil exports. The CPA and the Iraqi State Oil Marketing Board, which it controlled, made a deliberate decision not to record or “meter” oil exports, an invitation to wholesale fraud and black marketeering.

Money also disappeared in truckloads and by helicopter. The CPA reportedly distributed funds to contractors in bags off the back of a truck. In one notorious incident in April 2004, $1.5 billion in cash that had just been delivered by three Blackhawk helicopters was handed over to a courier in Erbil, in the Kurdish region, never to be seen again. Afterwards, no one was able to recall the courier’s name or provide a good description of him.

Paul Bremer, meanwhile, had a slush fund in cash of more than $600 million in his office for which there was no paperwork. One U.S. contractor received $2 million in a duffel bag. Three-quarters of a million dollars was stolen from an office safe, and a U.S. official was given $7 million in cash in the waning days of the CPA and told to spend it “before the Iraqis take over.” Nearly $5 billion was shipped from New York in the last month of the CPA. Sources suggest that a deliberate attempt was being made to run down the balance and spend the money while the CPA still had authority and before an Iraqi government could be formed.

I know that I will keep this story in mind as the investigation continues.
Posted by Liz Blondsense at 5:56 AM