The Pink Elephant Is Still In The Building.

In 1999, responding to questions about his use of drugs and alcohol, George Bush told the Washington 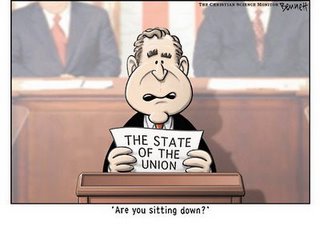 Post, "Well, I don't think, I had an addiction. You know it's hard for me to say. I've had friends who where, ya know, very addicted and they required hitting bottom (to start) going to AA. I don't think that was my case."

This not only confirmed my worst fears but adds to them. That kind of rationalization, willfulness, and arrogance are so classic of an alcoholic. Never mind the bottomless pit of failures and your total disregard of reality, Mr. C-Student. Your lack of intellectual depth or curiosity does not let you off the hook.

While we see a failed war, the waste of "reconstruction" the growing pile of the dead, the spoiled Frat boy, sees democracy. The undeclared war totally dominates the man as thought that's what he gains importance from , not having to solve actual problems, but it makes him self-important. God forbid there be any objectivity . He cannot see the world for what it is. He not only rejects reality, he has no sympathy for it. Reality is something that happens so far outside his belief system, it doesn't effect him. He stands firm in his beliefs, he stands on his head. It boggles the mind.

"I believe in what I'm doing."
That means he doesn't have to actually think about what he's doing. So it's not like Bush won't change his mind, he can't. He is totally inflexible and completely inflexible. It's all or nothing!

Bush has also said, "That he had pity for those who attack him" Oh really? Imagine being patronized by Bush. Well, you are. Meet us--the American people---the victims of the sublime smugness of sublime ignorance.

Tonight instead of listening to the State of the Union address I would suggest that the nation instead attend an Al-anon meeting.
Posted by Missouri Mule at 10:25 AM