More disinformation from the protest 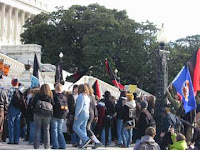 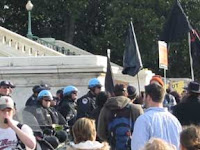 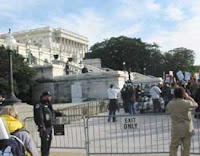 We just happened to be standing there when the supposed "rush on the Capital" happened on January 27th. You can see in the first picture a bunch of young people moving towards the steps. Many had bandanas over their faces. After a while police came in on motorcycles and stood on the steps of the capital while the young people chanted. There was no violence. I stuck around and took some pictures. Later, as we walked down the path away from the Capital, a few more kids wearing bandanas were walking up towards it. Despite what news accounts might have said especially this one which got the ball rolling, there was no painted graffiti on the capital. The story was bogus and cops were not ordered to stand down while kids defaced the capital. The right wing blogs, especially the stupid ass freepers, have run with this disinformation for days now. Check out all the bogus stories listed on google. Amazing. Not only that, the numbers of the protesters attending the whole shebang has been greatly misreported. The television news has done a great job in playing down the protest and minimizing the amount of those in attendence.

I found this blog with a picture of something written in charcoal on the ground about 30 ft from the capital. That was the extent of any graffiti and seemed to be the act of a lone charcoal-er.

And here's a video on YouTube from the other side of the steps from where DBK (who has pics too) and I were. Do the police officers look upset?
Posted by Liz Blondsense at 8:41 AM