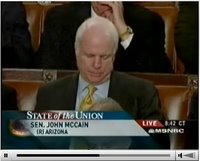 ... and ignores McCain's flip flops. The media didn't even bother to notice that McCain fell asleep while Bush was speaking. In a fair media, they'd take pot shots at his nap.

We can't rely on the media to expose GOP candidates for president in 2008 for who they are, but we can sure rely on the media, and even my local news station, to ask you to speculate on who Hillary was referring to in Iowa:

A man in the crowd asked Clinton what she had in her background that would make her a good commander-in-chief, given that the world has "evil" leaders and a lot of them "happen to be men."

Clinton rephrased the question for the audience because most did not hear what the man said.

"And what in my background equips me to deal" --Clinton waited a beat and got a gleam in her eyes -- "with evil and bad men?"

OMG. Stop the presses. This is important earth shattering news that must be disseminated even though no one knows for sure what she was thinking and most likely they guessed wrong. She must have been talking about her husband, right? Well that's what the media wants you to think when everyone knows that she was most likely referring to John Gibson at Fox News, the idiot who makes up news when there is nothing juicy enough for him to report for real. Or how about Bush, Cheney, Rupert Murdoch, Karl Rove, Lush Bimbo, Everyone on Fox News, the GOP, et al. Duh. How about she was thinking of all the bad men who are reporting this nonsense and pissing me off? Or the bastard who asked the loaded question?

It's a smear, I tell you, to suggest that she was thinking of her husband. It was projection to the nth degree, for if she believed that her husband was indeed evil and bad in the real senses of the words, then she would be an absolute fool to stay with Bill. They want you to think she is a fool or power hungry or both. She may understand men more than anyone thinks. That scares them too.

The media wants you also to believe that she is weak or that she must be a lesbian. Maybe that is what GOP wives who stay with their cheating husbands are. But maybe she isn't weak for staying with him- maybe she's strong and she values their companionship more than their sex life. Maybe she does stay with him for his political connections, but I doubt it. Who knows? Who cares? The GOPer's, probably due to experience, believe that a real woman would dump her cheating man and take him for all he's got. Hillary's got her own. She doesn't need to take Bill's.

I demand to know what the hell that growth is on the left side of John McCain's face. It's getting bigger and bigger. What is it? Is it contagious? Has he had sex with an African ape? Is it a growth that may make his head explode while he is standing at a podium somewhere thinking up a new twist to appeal to his current audience? Will the explosion be so gross that it will make me barf? Is this the new Pinocchio syndrome?

You can bet your sweet bippy that if a Democratic candidate had a suspicious growth on his or her face, Dr Sanjay Gupta would be all over it with bigger than life diagrams and breaking news specials featuring "experts" from around the world: "Alien V: Is a Democratic presidential candidate is spawning an alien, lizard-like, communist creature in his very jaw that is set to take over the world? You be the judge."

Back to the real world and what this post was supposed to be about in the first place until I went off on one of my usual tangents: Welcome to "The Real McCain." Your source for all things McCain. Watch the video. Do you wanna see a flip-flopper? Get your talking points here.
Posted by Liz Blondsense at 8:51 AM