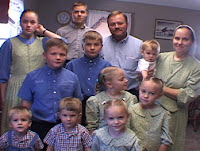 I watched the HBO documentary by Alexandra Pelosi, "Friends of God" yesterday. It was revealed by disgraced pastor Ted Haggard and others that evangelicals have the best sex lives and not only that, their women climax every time. Watch

You also get to see the story about the young woman who was in college studying law but found the lord and now has 10 beautiful kids whom she home schools. Aside from all the typical secular, liberal, northerner bashing, the program was pretty interesting. You can't really fault oppressed people for jumping on the "Jesus will save you" bandwagon. People need something to live for and something to make them happy. They seemed like nice enough people but perhaps a bit too gullible when it comes to anti-evolution and their questionable family values. Well ok, a lot too gullible. This country is supposedly big enough to grant freedom to believers of all sorts. I knew about these "holiest of holy" people, but since they didn't live around here, I didn't pay them much mind. However it bothered me that the ACLU and the rabid atheists made too much of a big deal about certain things and I feared that it would all come back and bite them in the rear while dragging the rest of us "live and let live" people into a theocracy.

You can however fault their leaders for making this movement a political issue and that is what you will see in the documentary, especially Jerry Falwell bragging about it: "Evangelicals are the largest minority block in this country. It's not a majority, but I don't think you can win without them. John Kerry learned that. Al Gore learned that. And Hillary will learn that in 2008." Hopefully not. But that is where their 'beliefs' become a threat to a free society. By coercing their believers to continually vote against their interests and with more and more people being forced into the fringes of society, their numbers will grow- their movement will grow. They are very organized and Falwell also bragged at how fast he can get them to literally shut down the Capital switchboard. Keep your eyes opened.

------
Something I noticed in the documentary that I really hadn't understood before: The evangelicals are so hell bent against Hollywood morality and homosexuality because they truly believe that god is going to punish the whole country for their acts. To me and you, it seems ridiculous, but this is what we're up against and it should be taken seriously.
Posted by Liz Blondsense at 7:40 AM

Email ThisBlogThis!Share to TwitterShare to FacebookShare to Pinterest
Labels: "friends of god", evangelicals