Looks Pretty Old To Me 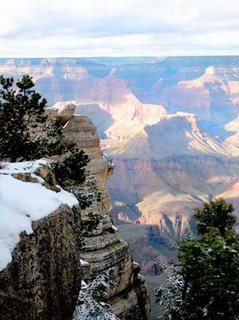 
Now for the geological agnostics
Good heavens, I can't believe this story is back in the news again. How Old is The Grand Canyon? For fear of offending flat earthers, the folks at the Grand Canyon National Park aren't allowed to speculate on the age of the Grand Canyon unless it's in the range of 6,000 years. Puhlease. What about NOT offending those who paid attention in science class and have working thought processes?

It's been 3 years since the story first took root. The Grand Canyon bookstore was forced to carry the book, "Grand Canyon: A Different View" which purports that the Canyon was created during the time of Noah. Naturally the people who work there were infuriated and demanded action. There was supposed to be a "high level" review but it seems that none was ever done. The issue is still a sore spot.

"I was well informed, but then I met the Lord and checked my brains at the door"
I blogged about this story 3 years ago. This is the quote from the Guardian by the man who wrote the book:

Mr Vail writes: "For years, as a Colorado river guide, I told people how the Grand Canyon was formed over the evolutionary timescale of millions of years. Then I met the Lord. Now I have a different view of the canyon, which according to a biblical timescale can't possibly be more than a few thousand years old."

Indeed. I met the Lord and now I'm blinded by stupidity.

Honestly, when I went to the GC in January 2005, I looked for that book and looked for signs that the national park was cowtowing to the fundies and I couldn't find it. If it was there, it was well hidden among the stacks of books about geology. I met no one who offered the so called "biblical" explanation of the canyon's formation and believe me, I was looking for it so I could blog it. Could my very well educated Noo Yawk axxent have given my indentity away and I was therefore briefed on the correct geology of the canyon by the ranger man in the big hat? I dunno. I was also gasping for air at the time and forgot to axe (ask).

This story could be overblown by eco-terrorists, but I still encourage those of you who visit the canyon and the surrounding areas to snoop around and see what the 'official' story is. See if you can find any park employees who are going along with the politically/fundamentally "correct" version rather than the scientific version. Let's "out" them. It's hurting my head. Since when is it politically incorrect to be correct?

What century is this?

help me
Posted by Liz Blondsense at 6:41 AM