UPDATE: John Edwards threw in his hat once again.
UPDATE: Barack Obama Worries about being shot.

I'm just going to go totally blonde bimbo here for a moment and lament Senator Evan Bayh's decision to drop out of the race for democratic nominee for president. He is such a pleasant looking man. Isn't he? Almost John Edwards-ish. I kind of like that boyish thing he's got going- I liked that in Bill Clinton too. Republicans probably hate that because their candidates are so unpleasant to look at. But then again, I always thought that John Kerry looked like he was melting before he got his face done.
/shallowness

According to the news, there was a huge Barack Obama frenzy in New Hampshire this past week. It worrys me that Obama may just turn out to be another "looks French" John Kerry. With the media ultimately controlling public opinion through lies and manipulation, I hope that other fine Democratic candidates would consider staying in the race (even not so cute ones)... just in case. You'll see why in the next paragraph.

How to undermine a Democratic candidate 101:
This is the type of crap that the media presented to Americans despite Senator Obama's success in New Hampshire: 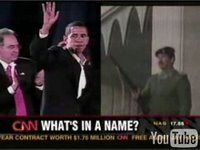 No sense mentioning how wonderfully Obama was doing in New Hampshire. And it's politically incorrect to suggest that Sen. Obama "looks black"... but "everyone" hates Muslims! Barack Obama's middle name is Hussein. Let's not only mention it on the news, says CNN, let's do a split screen showing America's arch enemy, Saddam Hussein alongside Senator Obama so we can imprint it in the minds of the sheeple. 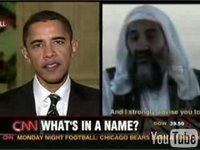 Double Whammy- His name rhymes with Osama!
Obama-Osama. CNN insists that the two be shown side by side for emphasis. Not that they have anything in common- in case you haven't played the name game, CNN just wants to give you a suggestion. This is worse than the Dean scream.

I don't know folks. I wouldn't get my hopes up about any candidate until the media is finished smearing them. This smearing isn't just on CNN. MSNBC and of course government mouthpiece FOX are on the bandwagon. Evan Bayh shouldn't give up yet.
Posted by Liz Blondsense at 10:55 AM