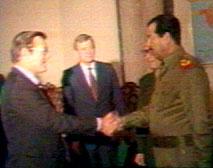 Personally, I think that capital punishment lets the bad guys off easy and it sends the message that killing people is ok.

Many people are very happy that Saddam was executed. I expected that sentiment from the Iraqi people who had to endure hardship and death under his rule. We know that the sanctions against Iraq in the 90's hurt the Iraqi people more than it affected Saddam. So many people died as a result of the sanctions and Saddam's death camps. So many people died when the US shocked and awed Baghdad. As an American, I feel guilty for all the deaths attributed to this man. But American "christians" are just tickled at the outcome. Don't you sometimes wish that Jesus would come back and kick some ass? I know, I know, the "christians" would be the first ones to crucify him again.

The powers that be in the US have made sure that Saddam doesn't reveal just how far up his ass they were. Juan Cole has some insight on this.

I haven't been able to actually watch the hanging but it's here. I clicked to pause it because I have a problem watching people get killed. I'm a total weenie. So I read the comments instead. Disturbing.

PS. Our friend who's a reservist just came home for Christmas from his second tour of duty to meet his daughter who was born while he was away. He'll be going back on January 9th. He doesn't know where. Bush doesn't care. Condi doesn't care. She thinks it's all worth it. I don't want our friend to die, but then again, his type is also part of the problem. He looks at it as if it's a job that pays well with benefits. I am having a big problem with human beings lately.

PS. Found the Southpark version of Saddam's death on youtube.
Posted by Liz Blondsense at 8:20 AM