You Know You Want It 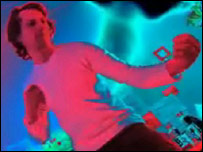 Australian scientists have created a T-shirt that allows air guitarists to play real music - without resorting to a real guitar.
The T-shirt has motion sensors built into its elbows that pick up movements and relay them wirelessly to a computer which interprets them as guitar riffs.

One arm is interpreted as picking chords while the other strums. The "wearable instrument shirt" is adaptable to both right and left-handed would-be rock stars.

"It's an easy-to-use, virtual instrument that allows real-time music-making - even by players without significant musical or computing skills," said the research team leader, Richard Helmer.

"It allows you to jump around and the sound generated is just like an original mp3."

Dr Helmer, an engineer from the Commonwealth Scientific and Industrial Research Organization (Csiro) in Belmont, Australia, added that there was a serious side to the "wearable instrument shirt".

The researcher said similar sensors could be used in the future to reproduce a person in a virtual world so they could get feedback on their actions and improve their sporting techniques. The T-shirt is the product of a collaboration by researchers specialising in computing, music and textile manufacture.

"The technology, which is adaptable to almost any kind of apparel, takes clothing beyond its traditional role of protection and fashion into the realms of entertainment," said the Csiro engineer.

By customising the software, the team has also tailored the technology to make an air tambourine and a percussion instrument called an air guiro.
Posted by Liz Blondsense at 11:06 AM