Papa Bush visited Abu Dhabi today at a leadership conference. Forty one was shocked by the hostility toward 43. Apparently 41 is also living in a bubble.

Bush, 82, appeared stunned as others in the audience whooped and whistled in approval.

41 answered a student who criticized globalization saying that it's nuts to think that the US only does things for the money. 41 is right, the student left out "power".

The hostile comments came during a quesion-and-answer session after Bush finished a folksy address on leadership by telling the audience how deeply hurt he feels when his presidential son is criticized. 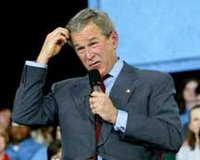 If 43 was my son, I'd be mortified at his actions and yet upset when others made fun of him. But when you live life in the public eye, wheeling and dealing around the world in order to make your friends richer and more powerful, it's something you will just have to get used to.

Bush said he was surprised by the audience's criticism of his son.

"He is working hard for peace. It takes a lot of guts to get up and tell a father about his son in those terms when I just told you the thing that matters in my heart is my family," he said. "How come everybody wants to come to the United States if the United States is so bad?"

Because the regular people are so very lovely.
Posted by Liz Blondsense at 8:02 PM