Two More Douchebags Of The Week 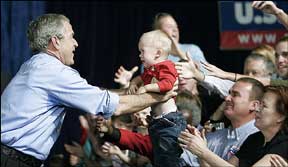 1. George W Bush.
Yesterday when speaking to college students in support of California gubernatorial candidate, Phil Angelides, Sen John Kerry cracked a joke. He told them to do well in school or they might get stuck in Iraq. He was referring to George W Bush, the loser in chief who if he had paid attention in school wouldn't have gotten our country into this quagmire and stuck in Iraq.

Tony Snowjob accused Kerry of dissing the troops, "Senator Kerry not only owes an apology to those who are serving, but also to the families of those who've given their lives in this. This is an absolute insult." Today Dumya, quoted Kerry on some campaign stops but neglected to mention that Kerry was referring to Bush. Bush told the crowd that Kerry was referring to the troops as if they were dumb. John McCain jumped on the bandwagon and called for Kerry's apology.

John Kerry grew some balls since the last time we heard from him.

Kerry said the Bush administration owes U.S. troops an apology because it "misled America into war and have given us a Katrina foreign policy that has betrayed our ideals, killed and maimed our soldiers, and widened the terrorist threat instead of defeating it.

"This is the classic GOP playbook," Kerry said in a harshly worded statement. "I'm sick and tired of these despicable Republican attacks that always seem to come from those who never can be found to serve in war, but love to attack those who did. I'm not going to be lectured by a stuffed suit White House mouthpiece standing behind a podium."

1. Sen. George Felix Macacawitz
was at a campaign stop in Charlottesville, Va. this morning. A law student stopped the senator on his way to ask him whether or not he spit on his first wife. The senator refused to answer. A Macacawitz staffer put the student in a headlock and threw him to the ground. He was then removed from the building. You can watch the video of the thugs at ThinkProgress.org. HFS
Reader Dogmom sent me this story about when he spit on a reporter. ick
Posted by Liz Blondsense at 6:18 PM