It's nearly the exact 5th anniversary of the news that a plane had struck the World Trade Center on 9/11. I called just about everyone I knew that morning who would be in and around downtown NYC to see if they were ok and if they were near the WTC, to get the hell out of there. I was on the phone with a friend while we were both looking at the television and the second plane hit the other tower. Things have never been the same.

Since that time, I have entertained many conspiracy theories and fortunately for my sanity, have dropped most of them after asking a whole lot of questions and delving deeper into every single news report and investigations concerning that day.

There is one nagging aspect of that morning that will not go away and it is bush's behavior in the classroom that morning- Bush's photo-op at Booker Elementary School which is conveniently located on YouTube. 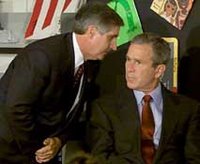 All conspiracy theories aside, this video says a lot. Bush later said he didn't want to upset the children so he waited for them to finish "The Pet Goat" after being informed of the attack. It took several more minutes to finish the story. But he didn't jump up when they were finished, he chit chatted with the kids and the teacher before he went into another room to speak with his advisors and work on his statement. In fact he delivered his statement in photo-op like fashion with the children gathered around him. Very strange behavior indeed.

While bush was listening to the rest of the story, he could see all the press and his staff whispering on cell phones. Wouldn't he be wondering what was going on? He still proceeded to fart around in the classroom after the kids finished reading the book.

Furthermore, I can't imagine that children would be freaked out if the president stood up in the middle of their reading presentation to say that he would have to take care of something very important. Eventually, they would know what it was anyway. If I was the mother of one of those kids in the classroom that day, you could betcherass that I'd be all over the press complaining that my child was put into danger. How was anyone to know that the school wouldn't be overrun by terrorists with bombs strapped to their bodies? How?

Why didn't Andrew Card wait for Bush to reply after informing him of the attack? Strange. It almost looks like a photo-op, doesn't it? Card just walked away and bush sat there. Think about yourself. How would you react? Oh you'd just sit there? Yeah right.

And what about the Secret Service? Wouldn't you assume if you were assigned to protect a world leader and if the country was attacked that perhaps the leader would also be on the agenda and you'd immediately get him the heck out of there? I would think so. Nope. The Secret Service didn't do anything. How did they know there weren't any other planes in the air destined to attack them in Florida? How did they know that there weren't any other alternate plans to attack that school that day? There were indeed other known hijacked planes in the air at that time. When bush left Sarasota, Air Force One wasn't even escorted. How did they know they were safe?

UPDATE: My co-bloggers, Jersey and Missouri reminded me in the comments, that the dog didn't bark. See WRH for the story.

Watch the video and tell me if that is a man who was completely oblivious to the meaning of the words, "America is under attack" or if he knew something was coming (he did if he saw the August 6th PDB) and was told to just sit there and wait for further instructions? If he was so unmoved when informed that the country was under attack, while the rest of us were freaking out watching our televisions wondering what would be attacked next, then why wasn't he even criticized for doing nothing?

Wasn't he wondering if fighter planes were deployed? Heck, I had assumed that morning that they must have been but I was wrong. If I were the president, that's probably the first thing I would want to know- is the Air Force handling this situation? Furthermore, news reports would later show that when the first plane hit, the word was out that it had bin Laden's fingerprints all over it, as we know from the 9/11 Commission. Bush proceeded to the photo-op anyway. (Watch the events happen on split screen.)


How could bush claim to have seen the first plane hit the tower two times?

Here's a video: What Bush must have known. I don't necessarily agree with the conclusion, but the questions are valid and there is some extra footage I hadn't seen. This video concludes that bush may have had access to a closed circuit tv showing the first plane attack. That's a stinging indictment. I don't come to that conclusion, but it does raise a question - Why did bush use the same story about what he was thinking on the morning of 9/11 when it obviously doesn't fit with the official story? No one bothered to tell him to not say that again?

"... you're not going to believe what state I was in when I heard about the terrorist attack. I was in Florida. And my Chief of Staff, Andy Card -- actually, I was in a classroom talking about a reading program that works. I was sitting outside the classroom waiting to go in, and I saw an airplane hit the tower -- the TV was obviously on. And I used to fly, myself, and I said, well, there's one terrible pilot. I said, it must have been a horrible accident.

But I was whisked off there, I didn't have much time to think about it. And I was sitting in the classroom, and Andy Card, my Chief of Staff, who is sitting over here, walked in and said, "A second plane has hit the tower, America is under attack."

And, Jordan, I wasn't sure what to think at first. You know, I grew up in a period of time where the idea of America being under attack never entered my mind -- just like your Daddy's and Mother's mind probably. And I started thinking hard in that very brief period of time about what it meant to be under attack. I knew that when I got all of the facts that we were under attack, there would be hell to pay for attacking America. (Applause.)

And so, I got on the phone from Air Force One, asking to find out the facts. You've got to understand, Jordan, during this period of time, there were all kinds of rumors floating around. Some of them were erroneous. Obviously -- for example, there was a news report saying that the State Department had been attacked. I needed to know what the facts were. But I knew I needed to act. I knew that if the nation's under attack, the role of the Commander-In-Chief is to respond forcefully to prevent other attacks from happening. And so, I've talked to the Secretary of Defense; one of the first acts I did was to put our military on alert.

This is the second time he gave a similar story on January 5th, 2002: (white house)

"Anyway, I was sitting there, and my Chief of Staff -- well, first of all, when we walked into the classroom, I had seen this plane fly into the first building. There was a TV set on. And you know, I thought it was pilot error and I was amazed that anybody could make such a terrible mistake. And something was wrong with the plane, or -- anyway, I'm sitting there, listening to the briefing, and Andy Card came and said, "America is under attack."

In five years, nary a word about the president's strange behavior on 9/11.
Posted by Liz Blondsense at 6:14 AM