Oh for god's sake, who's going to invade us? 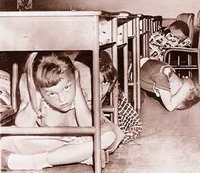 If the administration was so darn worried about national security, then they would have done something about it, but they haven't. Fighting in Iraq has nothing to do with our national security except that the war made more people pissed off at America so maybe our chances of being attacked are increased. I'm not building a bomb shelter.

If the pretzeldent and president of vice gave a shit about national security, we would get the hell out of the middle east and bring the troops back here to protect my arse. How are the Republicans protecting me? I don't see it. Closing military bases in the states gives me the impression that the powers that be aren't all that concerned about a military presence here. Is anyone checking the ports? I doubt it. Have you checked out the TSA workers in the airports? Feel safer?

I am so sick and tired of "national security" issues. The pretzeldent is going to deliver another fucking speech about the war on terra this Friday- probably because there were two reports released this week declaring that the invasion and occupation of Iraq are a disaster inciting more people around the world to become terrorists. Well duh. What did they expect? That people would just sit there and take it like big fat lazy Americans do?

With elections looming, the fear mongering will be in full gear. I'm putting in my ear plugs. How so many Americans buy this crap amazes me. No one is going to nuke the US. The nuclear arms race is a matter of "whoever dies with the most toys, wins". Lots of countries have to deal with a possible terrorist attack and they don't go around the world acting like big old bullies. I remember bush insinuating that Iraq wasn't part of the civilized world. What the hell world is he a part of? If someone said that about America, bush would order a napalm strike on their country.

Oh god, I needed to get that off my chest. What's on your mind?
Posted by Liz Blondsense at 6:14 PM