Guerilla Artist On The Loose 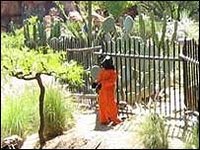 This guy is great. Banksy hails from Bristol, UK and is notorious for his subversive artistic stunts according to BBC News. He recently placed a figure of a Guantanamo detainee inside the Big Thunder ride at Disney Land over the weekend. It lasted for a full 90 minutes before it was removed.

He also replaced 500 altered Paris Hilton CD's showing her topless with a dog's head and remixed her songs titled thusly: Why am I Famous?, What Have I Done? and What Am I For? 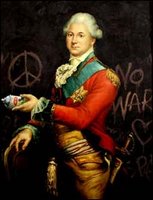 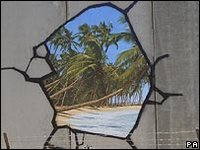 Banksy spray painted murals on the Palestinian side of the West Bank Barrier depicting an ideal life on the other side. (left) See more here. He infiltrated New York's Metropolitan Museum of Art among other museums with anti-war paintings such as Soldier With a Spray Can. Brilliant. (right)

Banksy added a painting to the Tate Museum of a rural scene with police tape. He also participated in an art show that featured "pigs painted in police colors, sheep painted in concentration camp stripes and a cow covered in images of Andy Warhol's face". Check it out here. 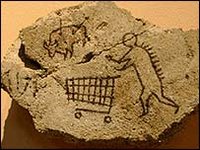 My favorite stunt was when he hoaxed the British Museum with a fake prehistoric rock showing a caveman pushing a shopping cart. (left) He unveiled a tremendous large bronze statue of "justice" as a prostitute. His mural of a naked man hanging out of a window while a woman in her underwear stands behind her husband who is looking out the window for her "lover" was so enjoyed by the public that it was allowed to stay on a building near his home town.

Some people are very appalled by graffiti, but honestly, if the artist is good, I'd rather see his or her work than the effects of war.

Click on any photos above for larger images and click on the links to see more articles about his work. (yeah, a lot of clicking)
Posted by Liz Blondsense at 7:34 AM