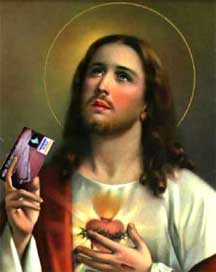 An entrepreneurial and modern pastor in a Georgia church came up with the idea for "Giving Kiosks" in the back of his church. The flock can stop there and make donations via their ATM cards. The pastor noticed that fewer people carry cash in their wallets and some people forget their checkbooks, so ATM machines would be just the ticket for his upper middle class parishioners to tithe. The three kiosks in his 1,100 member parish will give about $200,000 to $240,000 via kiosk this year, about 15% of the church's total donations.

It seems to have paid off for the church. Pastor Baker and his wife set up a for-profit corporation in order to market "Giving Kiosks" to other churches. Seven other churches have joined the bandwagon.

"The Bakers charge between $2,000 and $5,000 for the kiosks, which come in a variety of configurations. They also collect a monthly subscription fee of up to $49.95 for licensing and support. And a card-processing company gets 1.9% of each transaction; a small cut of that fee goes to SecureGive."

Other congregations, according to the article use "e-tithing" where their donations are directly debited from their checking accounts. The Bakers claim that if they get rich from their innovation, they will praise the Lord and make a donation to their church.

Amen
Posted by Liz Blondsense at 7:01 AM