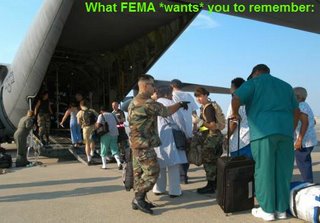 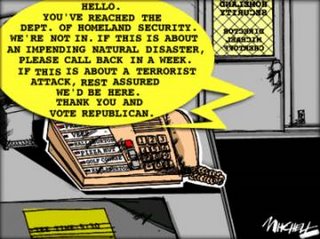 Wikipedia says that only (approx.) 22,000 were left in New Orleans during Katrina. They estimate that over a million people escaped the metro and had the means to reach safety.

Somehow, I don't quite believe that. One can look at the pictures of nice, clean-cut, well-groomed, calm people who were evacuated by Army and Air Force planes that FEMA posts on Wikimedia, and one might think that it was well-organized, carried out with efficiency and consideration, and that anyone who couldn't or wouldn't get out was obviously suicidal or simply stupid.

Isn't that nice? How they're rewriting history? Like Rockey, that douchebag from Meraux who went up to D.C. with his fake "FEMA" trailer to lick Dumbya's scrotum on-camera --- if you ask him, all the people who MATTER are doin' JUST FINE, YAH SUH! Meaning, the wealthy white people who were allowed to return to New Orleans before anybody else, THEY'RE doing fine, THEY didn't have any problems with insurance or FEMA or HUD, no, no, certainly not, and well, about those folks in the PROJECTS --- well, hell, they didn't OWN anything anyway, so who cares?!?!

A few badly-staged photo ops (like the one where Dumbya, the National Guard, and about 20 pieces of heavy equipment showed up to make it LOOK like they were DOING something, and then as soon as the press left, the backhoes, bulldozers, excavators, etc. were loaded BACK up onto their trailers and hauled away, with nary a lick of work done) and a few hastily-bribed step-n-fetchits do not a reconstruction make.

And yes, it's smelling just like a step-by-step remake of the ORIGINAL Reconstruction, wherein the Yankee carpetbaggers come down here, make a KILLING off of the natural resources and cheap labor (80% of the "crime" stats in NOLA right now are from all of the "guest workers" that have been imported from Mexico & Central America), and then BAIL OUT just in time to help foment another economic collapse. The Great Depression wasn't JUST because of the Stock Market and the Dust Bowl, kids.

And when they've made all of the money that can be made from raping New Orleans, they'll run again, and they'll leave no infrastructure behind, just like Homeland Security did to the centuries-old planning that New Orleans and Louisiana have ALWAYS had, but THEY came in here to destroy.

You can bitch about that batshit-crazy republicunt PUPPET Ray Nagin all day long, I'm not going to disagree. Even Kathleen lost her shit more than once during the mayhem.

But there have been hurricane survival plans down-pat in Louisiana and New Orleans from time immemorial.
When the Department Homeland Security was created, those arrogant assholes came into NOLA with shitty attitudes of MISSIONARY carpetbaggers, and did away with CENTURIES of planning and survival, in favor of their "official" way of doing things.

But the second before Katrina touched land, those pussies were GONE. Private planes, no waiting, no lines, no fighting thousands of others for the privilege. Homeland Security flat out fucking BAILED.

After they'd destroyed the infrastructure that had always taken care of the locals (especially the POOR locals) they left the municipal and state agencies with NO authority or resources to cover the giant hole that Homeland Security LEFT in all hurricane preparations.

And all of this comes after Dumbya's been slashing the U.S. Army Corps of Engineers budget since THE DAY THAT HE HIT OFFICE. Y'know why? 'Cause nobody who can AFFORD to escape a hurricane's wrath NEEDS to care about the levees. Anybody who NEEDS those levees to save their homes and lives, well fuck, those POOR people don't care, now do they?
So, when the shit hit the fan, was New Orleans prepared? Was Louisiana prepared? Fuck no. Because we're ignorant and illiterate? Fuck no.

BECAUSE THE DEPARTMENT OF HOMELAND SECURITY MADE IT THIS WAY.
They waltzed in here and dismembered every bit of planning, every safety measure, every preparation, and said that THEY knew what to do and how to handle it and everybody else, who'd been doing this shit ALL OF THEIR LIVES could just shut the fuck up and go home.

So, while I generally eschew conspiracy theories, it seems to me that the lack of planning and expertise on the part of Homeland Security could be viewed as having been VERY WELL PLANNED.

What class of people do the republicunts loathe the most?

Any who are not like them or of them.

Meaning, po' folks, folks of color, folks who don't kowtow to the despotic way that they've destroyed our Constitution and our country.

And that's who died. That's who was left in the lurch.

By a token "chocolate" republicunt who RAN for mayor as a "Democrat" because he could never have won as himself --- a REPUBLICUNT PUPPET OF THE RICH WHITES.

By a Texan-in-name-only son of privilege and dry-erase DUI records, a "president" who calls the richest one percent in this country his "BASE."

By a "department" that has no more secured the "homeland" than they have caught Osama bin Laden.

Believe that it's all "accidental" if you must. But don't kid yourself.
This shit was no accident.
And it won't be the last time.

If we allow these cocksuckers to get away with this genocide, then we'll NEVER stop them from committing it again and again as long as they can, towards their ethnic cleansing of the planet.

Hitler, to these guys, THOUGHT SMALL.

Liz sent me this link about how the Corps of Engineers says that the levees are "ready," even if they're not RIGHT. It's a classic example of bureaucratic pass-the-buck, cover-YOUR-ass politics.

Everybody's got an excuse as to why this shit isn't fixed yet.

And then we've got Karl Rove, to distract us with digging up JonBenet's corpse, with gay-bashing, the run-up to invading Iran, and bending us over the gimp barrel at the gas pumps.

Himmeler must be very very jealous.

The depths to which these bigots, these recidivists, these country-club THUGS will sink never cease to amaze me. It's easy to become numbed to this shit, when you see it EVERY FUCKING DAY.

I would never compare news shock to PTSD, but sometimes, it seems very similar.

How many lives do these trust-fund fuckwads have to WASTE before the revolution comes? How many CRIMES do they have to commit before we say, "ENOUGH!"?
How much longer can we wait?

How many more Katrinas will there be?

I think that Liz was the one who sent me the ThinkProgress Katrina Timeline, but then, so did everybody else. Here's the link if you need it.

Oh, and btw, in case you haven't seen "Katrina-dot-com," it ain't whatcha think that it is…

She probably means well, but bragging about the number of hits, and then posting your own ersatz "resume" on the same site with all of that cutesy "gawd" shit and the portraits of the storm's devastation --- opportunism gets more fucked-up every day.

But how much they can change the corruption and graft that the Bush regime encourages has yet to be determined. And it's a very different thing to have outsiders come in and piss taxpayers' money away, when they're supposed to be protecting LIVES, (not their own pocketbooks) and apparentlly are completely unwilling to learn a damned thing about this city or how it actually functions. What will it take to bust these fuckers, once and for all? What will it take to free what's left of New Orleans from republicunt slavery and greed? 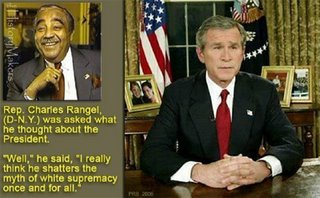 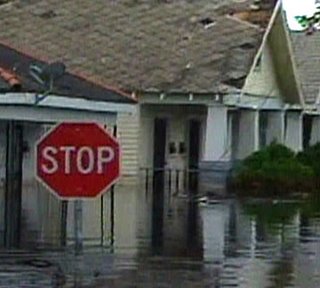