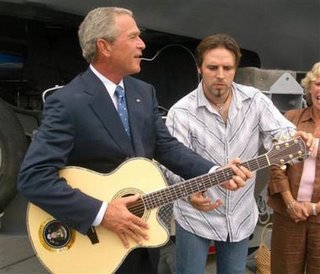 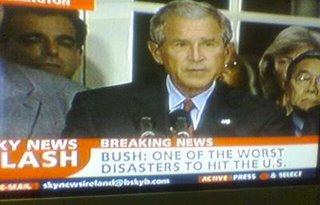 I appreciate the fact that y'all are indulging my Katrina-related online mourning. And it's not over yet.

I can't stop thinking about how the Red Cross came out of this shit UNSCATHED, and people are STILL sending them money that's SUPPOSED to go to Katrina survivors.

And I can't forget that the fucking Red Cross waited SIX MOTHERFUCKING DAYS to go into Jefferson, Orleans & St. Bernard Parishes, because THEY DIDN'T WANT TO PISS OFF DUMBYA, who hadn't returned from his FUCKING VACATION YET. SIX GAWDDAMNED DAYS!!! The Salvation Army was in there THE NEXT FUCKING DAY. The day after Katrina hit, the Salvation Army had mobilized their forces, before the State Troopers and U.S. Army and National Guard had locked-down the interstates and Highway 61 to all southeast-bound traffic. The Salvation Army was putting food into people's hands even as the floodwaters surged.

And the fucking Red Cross holed-up in hotels and "rode out the storm." People died while the Red Cross daintily stepped back, for fear of offending the republicunts who sang and danced and ate birthday cake while our Rome burned.

Don't ever forget that.

I'll never forget the shock, of seeing almost every neighborhood that I'd ever lived in, overcome with polluted flood water. I'll never forget the anguish and rage because I didn't get on the road in time and wouldn't even get to the Bonne Carre spillway before I'd have been sent back. I was online through that whole first couple of days, and I didn't do shit. And I can never forget that, either. I should've been in the 8th & 9th wards. And I was sitting here, in the comfort of my little apartment, never once comprehending how bad it would become until it was too late to get down there and do something about it. I wanted to go down there and pull people out, at least get them to Baton Rouge, get them out of that hell. And I didn't.

If Liz & Archie hadn't started the ball rolling, I probably wouldn't have had a clue of what to do, because nobody at the state OR federal levels wanted anybody going into New Orleans to help, surely THEY would have everything covered. At least, that's what they SAID. All I could do was scramble to find someplace where I could be of help. And it still doesn't feel like I did enough. It probably never will. Because every time I see that footage of bodies floating down Claiborne or Rampart, every time that they show the needless carnage and despair at the Convention Center, every time I wonder where my old friends are, the rage, the anguish, the frustration is all right back. Right there. And I don't go searching for them online because I don't want to find out what I probably would. I already lost Barry Cowsill. I can't take another one. I'm too weak for this kind of massive shit.

If this had happened anywhere else in this country, it wouldn't still be in such a state of neglect and incompetence. If this had happened to anyone else in this country, there would have been a plan in place, and there would not have been over a thousand deaths. There wouldn't be an almost unanimous consensus (amongst republicunts, mainly) that "those people" deserved what they got, for not having the money or the means to get out. There wouldn't be mainstream media who dig up the corpses to wave around for ratings, but conveniently forget where George W. Bush was, the whole time that the whole fucking shithouse was exploding.

It still hurts. It probably always will. And this is all, for now, that I can do about it. To try and keep whatever small part of the world that I can reach from forgetting.

New Orleans is not the only place that I've ever lived, or even for the longest span. But it was the first place on this earth where I ever felt at home. And it will always be home to me. Those 12 years changed my DNA. I am a New Orleanian, no matter what redneck shithole I was born in, or what redneck shithole in which I currently reside. And no matter how long it takes, I will get home. That is the only hope that I have at this point, especially considering the rate and the degree at which things are NOT happening.

No-bid contracts all around, but how many people have gone home? 45,000? Not even. Over half a million people left Orleans that week. And close to another million in Jefferson and St. Bernard. And yes, a great many of those were in public housing. Those are the ones that they don't want to come back. Don't let the P.R. fool you, don't believe anything that you're told by any government or any corporation.

This was an ethnic cleansing, and it will forever change the face of this country. At least it damned well better. Because if all the people who cared about New Orleanians then don't care anymore, then what in the hell is the point? If they can forget the crimes committed by our "president," by our government, then what will they fall for next? Who will they forget next? And how many more will die, and then be conveniently allocated to "oh, well" history?

And don't ever stop being pissed about this.

No matter how much the despair and depression push you down, DON'T STOP BEING PISSED.

And never let those fuckers off of the hook. 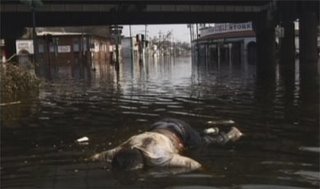 Posted by Anntichrist S. Coulter at 2:39 AM