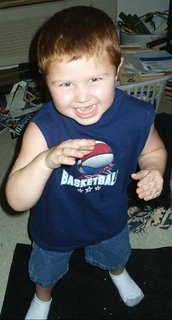 No, babysitting isn't my favorite thing to do, but when the kid's this one, I make exceptions.

The Katrina stuff is tearing me up. There's so much to post about, there's still SO much yet to be done, that may never get done, or done properly. But for today, all I had to do was play.

Not trying to justify anything, just trying to remember that ALL of life isn't as evil and horrific as the mass murders that happened last year.

For a minute, anyway.

And Stinkeye sent me a very good, if not surprising, link --- State Farm is now doing to Mississippi what they did to Louisiana for DECADES (before they pulled out of the state re: homeowner's insurance ALTOGETHER, and stuck it to me and about a hundred thousand OTHER homeowners, back in '99), and I hope to hell that they bust these motherfuckers but GOOD.
http://www.truthout.org/docs_2006/082506T.shtml

(I don't REALLY look old enough to be a GREAT-aunt, do I?)

I'll be back to the "anniversary" soon enough, believe you me, kids. It's the only way to keep this shit from making my head explode --- getting it out before it CLAWS its way out.
Posted by Anntichrist S. Coulter at 10:32 PM