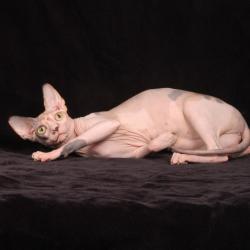 They also feature the "winningest" and "losingest" cats that have graced their site.

Meet the Losingest Poster Child. To quote the oft-quoted JanetL: "That poor cat looks like it's being forced to pose for Hustler against its will!"

Biddy & Boy, as well as my first cat Simon (with Pookie the half-pit, half-English bulldog that he raised from a pup), have been added to the contest, but haven't shown up yet in the numbering system. 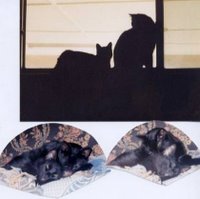 If you see my furry chirrens, please vote for 'em! (Seeing as how starved for attention and amusement as they claim to be... heh.) I would've added Vincent atop the ladder, but they said that the picture was too small. He was adorable too, dammit.

Also, Jesus' General's recent additions to OfTom's family are competing, as well! Vote for them, too --- brave soldiers that they are...!

Posted by Anntichrist S. Coulter at 12:05 AM