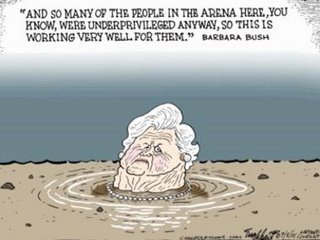 Okay, I'm fed the fuck up with the "hype-the-fear!" MSM douchebags who keep bringing up the "anniversary" of Katrina (nobody remembers Rita, for some reason), like it's something to be "celebrated" or dwelled upon & mumbled about so that it can pull up every horrific memory & nightmare that those who survived it ALREADY battle every fucking day.

Louisiana --- New Orleans especially --- doesn't have DICK in the way of psychological or psychiatric services for the poor anymore, and New Orleans doesn't have ANY psychological services what-so-fucking-EVER, so what is the fucking POINT of dredging this shit up, without ONCE "remembering" WHO was to blame for those people dying, those historical neighborhoods (Treme, 9th Ward, Gentilly, etc.) being DESTROYED, or WHY those cocksuckers let those people suffer & die, and then let the RICH WHITE HOMEOWNERS IN THE GATED COMMUNITIES BACK INTO NEW ORLEANS BEFORE ANYBODY ELSE.

A helluva lot of people STILL can't go home. And it makes me puking-blood SICK to hear those lily-white MSM douchebags murmuring with their most obscenely-morbid fake voices of doom about the "trauma" that Katrina & Rita survivors have to deal with every day, yet they keep PLASTERING PICTURES OF THE DEVASTATION ON THE TEE-VEES, without ONCE offering a solution, much less any REASON for the continuing CLUSTERFUCKS that have resulted in almost NO improvement. The Shaw Group, Halliburton & Bechtel have ALL won big-ass no-bid contracts to "repair" (read: tear-down and replace with condos) the destroyed neighborhoods, but do you see a few hundred thousand people getting to go home?

Not even 45,000 are back, and unlike the pre-Katrina demographics, most of those are RICH AND WHITE AND DIDN'T LOSE *SHIT* TO THAT HURRICANE. Convenient, isn't it?

Thusly, as the MSM vultures ramp-up the trip down memory lane/that avenue of death & misery @ Causeway & I-10, I'm going to post some pictures/images that came out last year as the clusterfuck/mass-murder escalated. Some from here, some from Jesus' General, some from friends (like Oracle w/the below graphic), and some from blogs & sources I've forgotten. It's not enough to just "remember," fake-sympathetic "memorials" don't accomplish shit. Ray "Chocolate City" Nagin and his fireworks display didn't exactly tickle anybody's funnybone. It's not enough to just remember, we have to remember WHY. 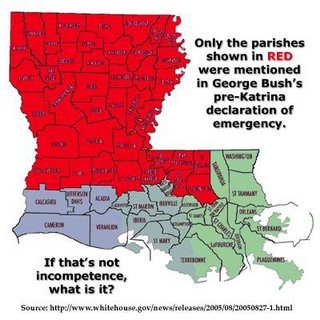 Posted by Anntichrist S. Coulter at 12:24 AM