A Picture Says a Thousand Words

So do rapture chat rooms. The debate rages on as to whether or not Ezekiel 38-39 is playing out at the present time. The Rapture Ready folks see wars, maybe not the end times, but the government doesn't want you to think that anyone is actually in a war, unless of course they need to use that word to scare us into submission.


Don't pay any attention to the pictures you see.

God forbid any American says that Iraq is in the midst of a civil war. Car bombs going off constantly doesn't make a civil war says our government. My husband got a phone call from a friend who is serving in the reserves in Mosul and he says that they are busy every hour of the day trying to stay alive while Iraqi's work hard to kill each other.

Iraqi's are fleeing their homes in terror and 30,000 became refugees as ethnic cleansing destroyed their neighborhoods and "sectarian violence has turned ever more bitter since a U.S.-backed national unity government was formed two months ago, official data showed on Thursday." But it's not a civil war?

A car bomb explodes in Kirkuk
Nothing to see here.


Tony Snow, speaking on behalf of the White House says about the Israel vs Hezbollah "squirmish": "What you have are hostilities, at this point, between Israel and Hezbollah. I would not characterize it as a war."

This is not a war yet? 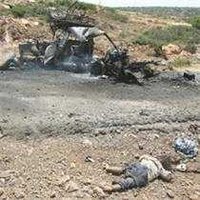 and this is just an average sight in Lebanon?
Posted by Liz Blondsense at 9:04 AM