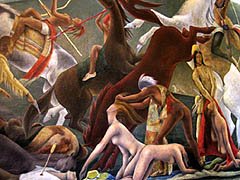 Check out all these murals that are displayed in the Ariel Rios Building which houses the EPA. One in particular, "Dangers of the Mail" by Frank A. Mechau which was installed in the 1930's depicts Indians scalping and murdering naked white women and killing white men. This mural is supposed to show the difficulty there was in delivering the mail nationwide. Needless to say, this mural has had a negative impact on the 30 or 40 Native American employees at the building and more than 700 Native American employees nationwide. During the Clinton administration the murals were covered up. Then when Bush took office they were cleaned up, brightened and put back on display. Now they are blocked by other displays but you can walk behind the displays and still look at the murals.

This article from 2000 explains some of the objections from both sides. I tend to believe that if you are going to depict Indians slaughtering white people, you ought to be fair and also depict the genocide of the Native Americans by white men if you feel you must illustrate the bloody beginnings of white America... while you're at it, paint murals of some of the horrors against the black people. Sure it was dangerous settling in America, but whose fault was that? honestly. How about some murals of American imperialism in action too? Our bloody past (and present) should be remembered, absolutely, but it shouldn't be white washed (pun intended).
And that's my blonde opinion du jour. I am off to Maine now.

hat tip boingboing.net
Posted by Liz Blondsense at 10:36 AM